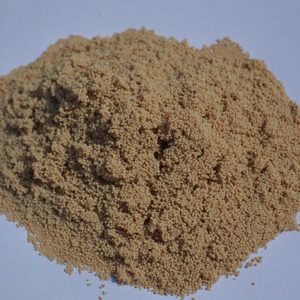 Non-refined feed stocks, such as crude oils, rendered animal fat and yellow/brown greases, are inexpensive and readily available for the production of biodiesel fuels.

However, their high free fatty acids (FFA) content limits usability because they react unfavorably with the base catalysts employed in trans-esterification reactions.

Esterification Resins are the solution to that problem.  They convert the Free Fatty Acids directly into methyl-ester.  it is done without a PH change and it does it continuously with efficiency.  It is achieved by the addition of MEOH into the feed stream prior to contact with the esterification resins.

A temperature of approximately 185F @ 31 PSIG will make sure that the MEOH stays in a liquid form at that operating temperature.  Between each stages, evaporation must take place in order to remove the water that was generated during the conversion process.  If the water is not removed, the 2nd stage of esterification will not convert well.

Esterification is the general name for a chemical reaction in which two reactants (typically an alcohol and an acid) form an ester as the reaction product.  Esters are common in organic chemistry and biological materials, and often have a characteristic pleasant, fruity odor.

This leads to their extensive use in the fragrance and flavor industry.  Ester bonds are also found in many polymers.

Esterification of carboxylic acids with alcohols

The classic synthesis is the Fischer esterification, which involves treating a carboxylic acid with an alcohol in the presence of a dehydrating agent:

The equilibrium constant for such reactions is about 5 for typical esters, e.g., ethyl acetate. The reaction is slow in the absence of a catalyst.  Sulfuric acid is a typical catalyst for this reaction.

Many other acids are also used such as polymeric sulfonic acids.  Since esterification is highly reversible, the yield of the ester can be improved using Le Chatelier’s principle:

Reagents are known that drive the dehydration of mixtures of alcohols and carboxylic acids.  One example is the Steglich esterification, which is a method of forming esters under mild conditions.

The method is popular in peptide synthesis, where the substrates are sensitive to harsh conditions like high heat.  DCC (dicyclohexylcarbodiimide) is used to activate the carboxylic acid to further reaction. 4-Dimethylaminopyridine (DMAP) is used as an acyl-transfer catalyst.

A Fixed Bed setup is used to hold the resins in place within the vessel.  An 80 Mesh screen that is well supported is placed and installed in the bottoms of each of the vessels.  Careful planning is required to avoid opening the special screens that are installed and damaging them.  In addition, injection into the vessels is done carefully to avoid liquid channeling.  All vessels are designed and stamped to ASME requirements. 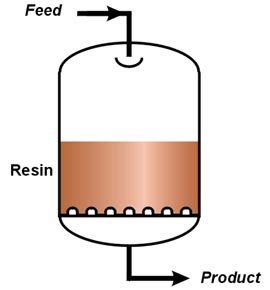 Also, if you need the Vessels and Skids provide as well, pls visit the SRS Parent company for a quote.

In addition, if you are looking for the Dry Wash Resins or Guard Resins pls click on the links.